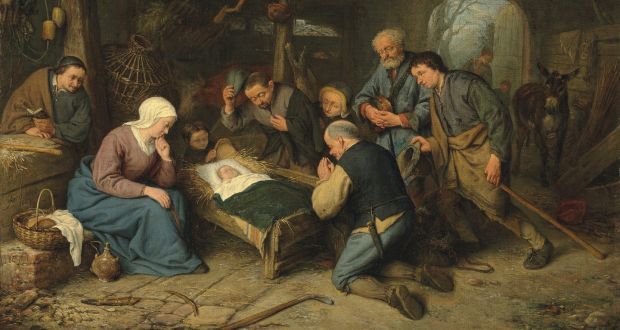 There are three basic references to the year and the month of the birth of Jesus Christ. In the New Testament, the apostles tell of the Magi following the star from the east, and the shepherds with their flock out in the fields. The third reference comes from the dating of the founding of Rome.

The Magi were astrologers and probably came from Persia or southern Arabia. They are believed to be linked with the priesthood of Zoroastrianism, who practised astrology. The 5th Century BC historian Herodotus attested to the astrological prowess of the priests of Persia. (The Bible does not give the number of magi that visited Jesus. The number of three was derived from the three (types of) gifts they presented.) Which star did the Magi follow?

Remembering that most of our planets can be seen with the naked eye at night and look like stars. In ancient astrology, the giant planet Jupiter was styled as the King’s Planet, representing the highest god and ruler of the universe: Marduk to the Babylonians; Zeus to the Greeks; Jupiter to the Romans. The ringed planet Saturn was deemed the shield of Palestine, while the constellation of Pisces, which was also associated with Syria and Palestine, represented epochal events. Jupiter encountering Saturn in Pisces would have meant that a divine and cosmic ruler was to appear in Palestine.

The astronomer Kepler noted in the early 17th century that every 805 years, Jupiter and Saturn come into conjunction, with Mars joining the configuration a year later. Since Kepler, astronomers have computed that for ten months in 7BC, Jupiter and Saturn travelled very close to each other in the night sky, and in May, September, and December of that year, they were conjoined. Mars joined the configuration in February of 6BC.

The Chinese had more exact and more complete astronomical records than the astrologers of the Middle East, particularly in their tabulations of comets and novae. In 1871, astronomer John Williams published an authoritative list of comets derived from Chinese annuals. Over March and April 5BC, Comet No. 52 on the Williams list appeared for some 70 days near the constellation Capricorn, and would have been visible in both the Far and Middle East. As each night wore on, the comet would seem to have moved westward across the southern sky. This could have been the Magi’s astral marker. Comet No. 53 on the Williams list is a tailless comet – which could have been a nova – that appeared over March and April in 4BC in constellation Aquila, which was also visible all over the East.

The star that the Magi followed – the Star of Bethlehem – could be any of the astral markers that appeared in 6, 5 and 4BC.

More discussion abounds, but there a nice piece in the International Business Times https://www.ibtimes.co.uk/can-astronomy-explain-biblical-star-bethlehem-1597906

“And there were shepherds living out in the fields nearby, keeping watch over their flocks at night.”

In Palestine – as in the rest of the Middle East at the time – shepherds stayed with their flocks in the fields only from Spring to Autumn. They brought their sheep in during the winter to protect them from the cold and rain. It is thus unlikely that the shepherds went to Bethlehem in December.

The Bible does not mention the celebration of Christ’s birthday, and the early Christians seem not to have celebrated His birthday. However, to avoid persecution, they would hang holly on their doors during December just as the Roman pagans did for Saturnalia, their feasts honouring their god of harvest. Likewise, in September, during the Jewish Feast of Trumpets (modern-day Rosh Hashanah), they would borrow some of the custom to protect themselves, carrying on with their own customs behind closed doors. This added to the speculation that early Christians celebrated the birth of Christ in September. It is noted that Jerusalem swelled from about 100,000 people to over 1 million during the Feast of the Trumpets, which meant that there would have been little room at the inns of Jerusalem and the surrounding towns.

The dating of the founding of Rome

Herod, who ordered all the babies in Bethlehem younger than 2 years killed, was, of course, alive when the Magi visited the baby Jesus. So we know that Jesus was born in or before 4BC, as astronomers point out when referring to the Star of Bethlehem.

The reference to the birth of Jesus “two thousand years ago” is wrong in two ways:
a. there was no year 0,
b. Dionysis’s calculation was off by at least 5 years, as mentioned above.

In the year 274AD, solstice fell on 25th December, and Roman Emperor Aurelian proclaimed the date as “Natalis Solis Invicti” the festival of the birth of the invincible sun. In 320 AD, Pope Julius I specified the 25th of December as the official date of the birth of Jesus Christ. In 325AD, Constantine the Great, the first Christian Roman emperor, introduced Christmas as an immovable feast on 25 December. In 354AD, Bishop Liberius of Rome officially ordered his members to celebrate the birth of Jesus on 25 December.

In some parts of the Roman Empire (mostly the Eastern parts), solstice was celebrated on 6 January, the last festival day for those who started solstice on 25 December. (Saturnalia was held over 12 days.) The Orthodox Churches of Eastern Europe celebrate Christmas on 6 January.

So the most likely year that Jesus was born, is 6BC, probably in the month of March. There was no year 0 (zero) recorded, so the 2nd millennium celebration of the birth of Jesus should have been held in March 1995.