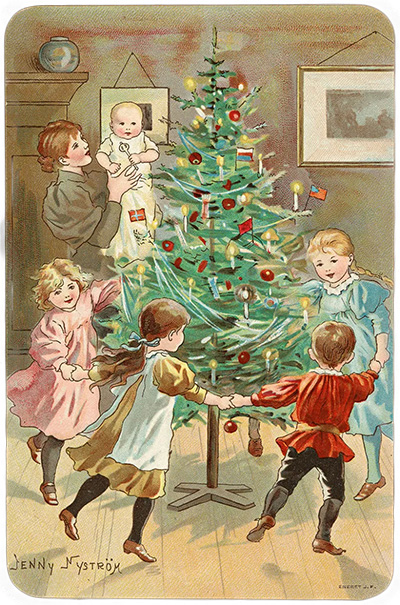 Though wood engravers produced prints with religious themes in the European Middle Ages, the first commercial Christmas and New Year’s card was designed in London, England in 1843.

The card was not received without controversy, for it showed a family raising their glasses to toast Christmas. Puritans immediately denounced it, but the idea was a hit with others. The Christmas card became very popular and other artists quickly followed Horsley’s concept. A particularly popular card was designed by English artist William Egley in 1849.

Greeting cards were not new. Since Aloys Senefelder perfect lithography in 1796, merchants would send their customers best wishes for the new year. (Lithography is the technique by which large numbers of drawings or texts first drawn on a finely-textured stone could be reproduced on paper.) Christmas cards gradually replaced New Year’s card, except in France, where there was a preference to the latter.

Father Christmas on Christmas cards The first greeting card produced in the US was by German lithographer, Louis Prang, who emigrated to New York around 1850. Prang set up a workshop in Boston, Massachusetts in 1860 and began to produce the first colour cards with scenes of winter tales for Christmas and New Year.

During the American Civil War, Abraham Lincoln requested a political cartoonist, Thomas Nast, to illustrate Santa Christmas (Santa Claus) with the Union troops to bolster their spirits. Nast was the first to introduce a Father Christmas in the now-traditional red suit and big leather belt.

The first Christmas cards were printed in 1843 in lithography by Jobbins of Warwick Court, Holborn, London, and hand-coloured by an artist named Mason. They were lithographed on stiff cardboard, with the greeting, “A Merry Christmas and a Happy New Year to You.” It also states that is was “Published at Summerly’s Home Treasury Office, 12 Old Bond Street, London