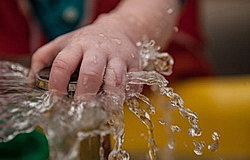 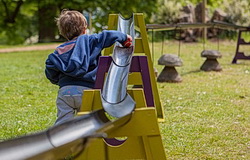 A parachute is a useful way of involving a large group of children in an activity and because of its novelty even those who would normally opt-out, tend to get involved.

Between 20 and 50 children can be directly involved around the perimeter of a 15 foot (4.5 m) parachute. The majority of games are co-operative rather than competitive and so good for generating a group spirit and togetherness.

Where can I get one?

If you don’t have a parachute they are a resource well worth investing in and for the use you can get out of it, relatively cheap.

We’re always looking for good suppliers of parachutes and play equipment so if you want to recommend a company or advertise your own company email us.

A parachute is best stored by taking hold of the centre in one hand, twisting the canopy loosely into a rope, rolling it up and stuffing it into a sack – thin nylon sacks sold for the storage of sleeping bags are ideal.

If you are indoors (or outside with no wind). Tell everyone that on 3 they are to create a mushroom with the canopy but to ‘let go and STAND STILL’. When they let go at it’s fullest it should soar to the ceiling. You should be able to step into the middle, catch the centre and deftly stow using the twisting rope motion before anyone moves!

Drop the parachute from the bag and instruct everyone to take hold of an edge with both hands. Once everyone is hanging on, move them around the perimeter until they are evenly spaced out. Holding the canopy with fingers/knuckles on top works best.. Get everyone to hold the parachute taut and still at waist level.

For children practice working unison by getting everyone to raise and lower the parachute together. It also helps players to get accustomed to the way the parachute behaves. Keep hold of the edge all the time. Let the children experience the parachute billowing up. Do this a few times and on the third or fourth lift ask everybody to get the canopy as high as possible so that it billows tip. The development of this is to take one or more steps in towards the middle still holding the parachute so it creates a mushroom shape. As the parachute collapses, move back out. Practice this basic co-ordination until everyone is happy.

We’ve used parachutes in our play a lot, but there are some general ules about safety. Most of these are common sense.

CAUTION
You will sometimes see games described which involve putting one or more children (or adults) on to a parachute that is held off the ground. This is at your own risk.
Some risks are:
– Games involving using the parachute rather like a trampoline with the margin held tautly and somebody bounced in the middle. The problem is that the player does not know where the ground is and it is all too easy for him to be bounced on hard ground as the parachute is slackened with consequent injury to spine or head.
– Games that involve walking on a tight parachute it is possible to damage an ankle by a sudden unexpected contact with the ground even though the drop is 10 cm or less.