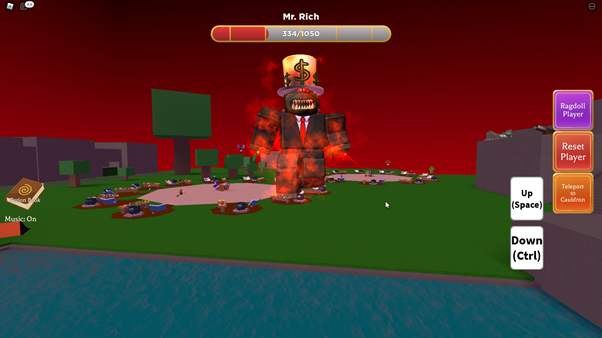 So for those not in the know, Wacky Wizards updates weekly. This is the Boss update. It was released on 30 June 2021.

This is the boss update. The boss in the picture is currently on fire due to a potion that was used. He starts with very little health but his health increases rapidly. The highest I’ve seen the health is 1200. His current health also increases alongside as a percentage. The boss spawns every single hour and takes 1 to 3 minutes to beat on average. His attacks consist of

The reason for beating the boss is he drops a cyclops eyeball, which can be traded with Oz for the new special ingredient. The eyeballs can also be put into your cauldron to make a special potion.

In this image is the cannons that are used to fire potions that can be used to damage the boss (the potion I use consists of 1 nuke and 99 chillies – the nuke is made of 1 dynamite and 1 giants ear). There are two of these cannons on the map.

The cannons automatically aim at the boss to fire a potion, you have to have a potion in hand and then click or tap the cannon to fire the potion at the boss.

I found this under the map. You can get here if you look for a crevice under the map which leads to this. I assume this sign is foretelling a future event (if you would like to investigate this I would love to know what you find and think what would happen).

This is a special potion that I developed myself (1 fly buck (1 Robuck and 1 fairy) and 10 fairies) – the Robuck is the new ingredient. This potion can allow you to phase through solid objects (do not go in water – it’s kinda hard to control). The object in question can’t be too thick otherwise you can’t phase through it. A method of going under the map is to drink this potion and then fly over to the cave. Once inside just go down and you are under the map. The reason this works is because the cave floor is very thin (once you are under the map you can look for the crevice I mentioned earlier.

You may not feel very small while flying. This is the size you are if you use the potion.