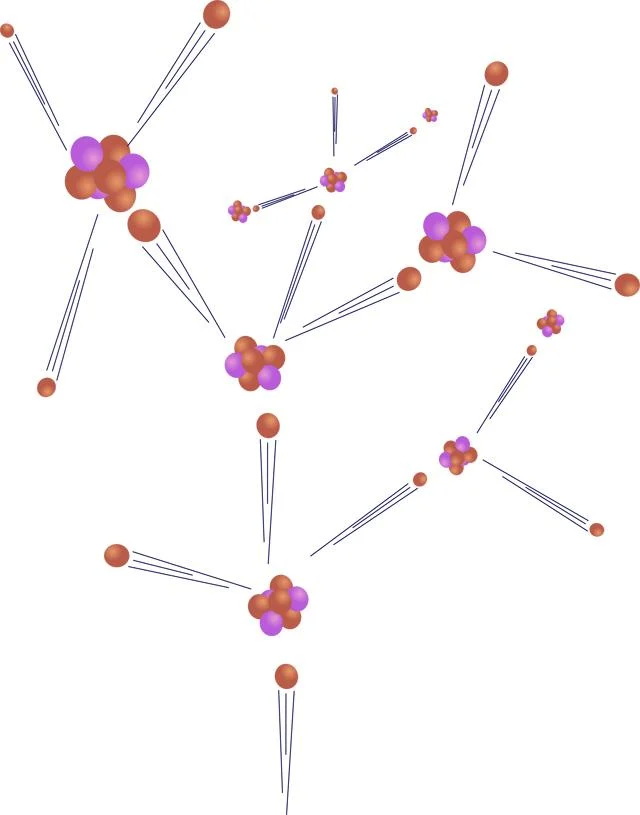 Fun game that’s also educational as a useful model of a chain reaction.

Pick a large area for players to be able to run around in. Players pair up with each other as in Elbow Tag, holding hands or linked arm in arm, and scatter around the playing field/area.

One person is chosen to be the chaser and when the game starts attempts to catch as many pairs as possible. However, whenever a pair is caught they split up and each of them then joins in as individuals to become a chaser. Once you become a chaser you remain so for the remainder of the game. The game ends when there are no pairs left.

If you are teaching about nuclear reactors and wanting to demonstrate how they work. You could consider introducing into the game ‘control rods’ to show how they regulate reactions.

One way could be to introduce areas such as hoops placed on the ground or drawn circles to define a control rod. Paired players can go over and through these areas, but free chasers cannot and if they do accidentally go into the area they either sit down in it or leave the game.

The problem is that in reality, the particles involved in a chain reaction move randomly. There is no thought process involved. So to eliminate the human element of free chasers deliberately avoiding the control rod areas, you could use a dodge ball or balls. Either thrown by the leader or split your group up and have one group the ‘control rods’ and one group the ‘fuel rods’. Those who are Fuel rods become the pairs running to avoid the free chaser (the neutron), while those who are control rods are the throwers with the task of trying to hit below the knee any free chasers with the ball.

Another method is to give some players coloured bands to identify themselves as ‘control rods’. Control rods have the job of catching the fast-moving catchers (neutrons). Once caught an individual can no longer chase pairs but has to find another free neutron, join up with them and become a slower moving pair. Hopefully, if you play with large enough numbers, you’ll reach a stage in the game where you reach a controlled balance of players breaking pairs apart and others recombining them.

Vary the numbers in each group to see how it affects play and whether this reflects how control rods work in reality. Similar to reactors you could reach a point where the game would keep going ad infinitum.