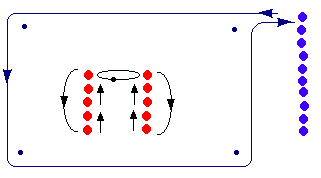 Similar to the game Tadpole but different arrangement.

Divide into two teams. Both teams take turns at running and throwing. Those running line up behind one of the post and wait for the signal to start, before taking it turns to run a relay around the outside of the base posts, the next member running only when the person in front has got back. The throwing team stand in the middle of the pitch and split up into two lines facing each other. The first person on one of the lines in the throwing team proceeds to throw the ball to the throws to the first person on the other line and then immediately runs to the back of his/her own line. The first person of the other line then throws the ball back to the person who is now at the front of the other line. This throwing between the foremost players continues until the last member of the running team has completed their circuit. Teams swap and team at end with most catches wins.