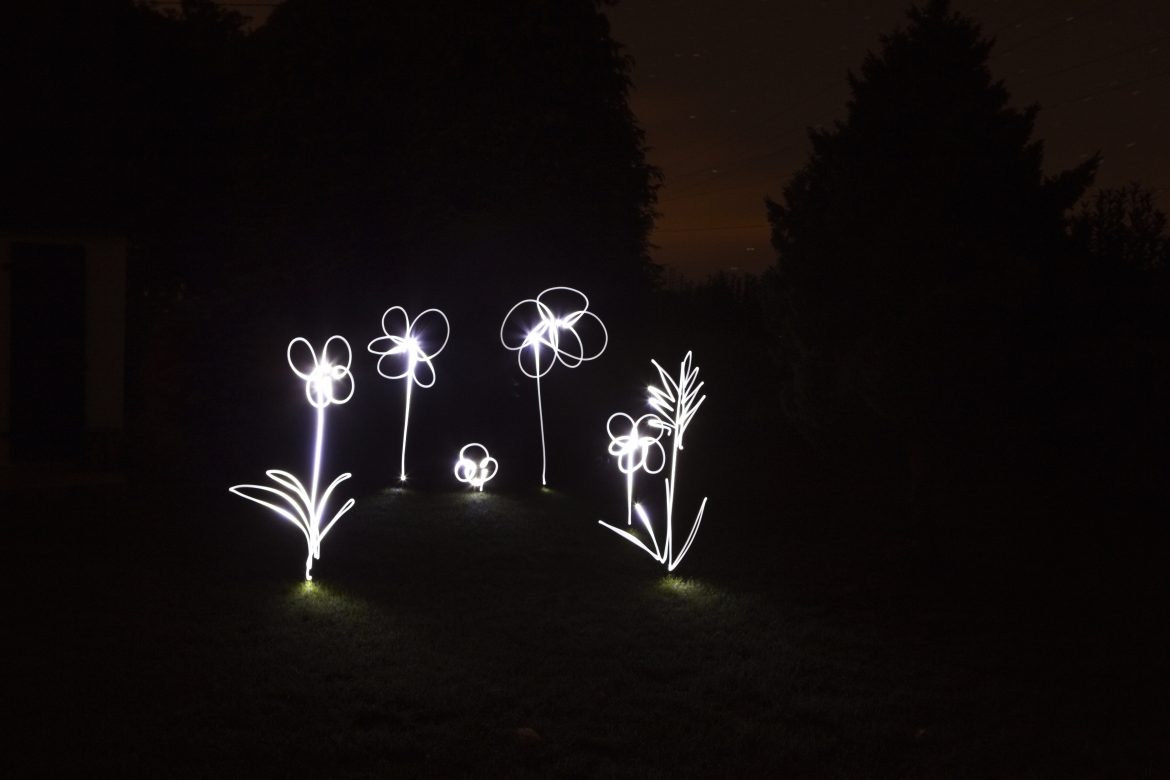 Playing and experimenting with light is a lot of fun. Especially for children.

Light painting is a particular photography technique that captures how any torch or light source is moved around into a single exposure. The technique is actually quite simple, but you do need equipment that enables you to do it.

Camera: Obviously something to capture an image with, but as a single image (not a video). You don’t need a particularly specialist camera, although if you have an SLR that’s great. However, you will need a camera or smartphone where you can change the exposure time to be a very long exposure of at least seconds and if possible ‘bulb’ mode which leaves the shutter open until you close it.

The longer you can keep the shutter open the more movement you can capture in a single image.

Tripod: While the shutter is open and recording movement, you will need the camera to be perfectly still or the camera will record its own movement in relation to any light source. The ideal is a tripod that fits the camera, but failing that any steady, stable surface will work like a rock, stump, tabletop, etc. Don’t worry so much about what height the camera is at. That’s a matter of preference.

Light: Something to do the actual ‘painting’ with. Sparklers, torches, bio-luminescent or glow-sticks, coloured lights. All will have different effects. It’s an opportunity to be creative.

Location: Somewhere dark…. as dark as possible. The longer you leave the shutter open, the more background light the camera will capture. The best results I’ve got was somewhere well away from city lights.

Setting up the camera

This is the technical part. You might need a torch just to be able to see what settings you are using. You will need your camera to be in manual. If possible, set the camera to ‘bulb’, but if that’s not possible set the exposure time to be the longest time possible.

If you can control the aperture you will need this to be as open as possible. Aperture size is measured as the f-stop, but the larger the aperture the smaller the f-stop value and this is regulated by what lens you are using. Typically lens can have an f-stop of 2.8 or 4.0 . But you need to be aware that there is a trade-off between large aperture and what’s known as focal distance. The wider the aperture the smaller the focal distance and that gets smaller the closer to the camera the subject is. You might find it useful to try out your chosen location during the day or at least with enough light around so you know how far away your subject is (where you are light painting) and how far you can move towards or away from the camera to remain in focus (if that’s necessary).

However, if you are using a particularly bright light you may not need to worry about having a very wide aperture as it’ll be captured quite quickly, whereas paler light sources will need a more open aperture.

Choose which ISO you want to use. ISO refers to what used to be the film speed or sensitivity of the film to light, but still applied to modern digital sensors. Typically ISO 100 is used for very bright days and ISO 400 or ISO 800 for indoor or dull days with the trade-off being the higher ISO the ‘grainer’ the image. Modern digital cameras now have abilities to go to much higher ISO’s and with very little graininess. However, unless you are planning to capture some of the background or surroundings you won’t need a very high ISO. Something like an ISO of 400 should be good enough for relatively dim light sources. The advantage of digital cameras though is immediately being able to see the result and adjust settings.

Oh and you will not need the flash on the camera… although this can be used to effect. Lighting a subject briefly and then light painting around it.

Once set up. It’s time for some fun. Once the shutter is open you can create whatever shapes you like in the air and area of focus. Paint up and down the trunk of tree, paint around a person standing still, write or draw something in the air. The choice is yours. With writing though it’s better to be facing the camera (so your body doesn’t block any of the writing) and to create the letters in reverse and words backwards.

Move around so that shapes created are not in the same space.