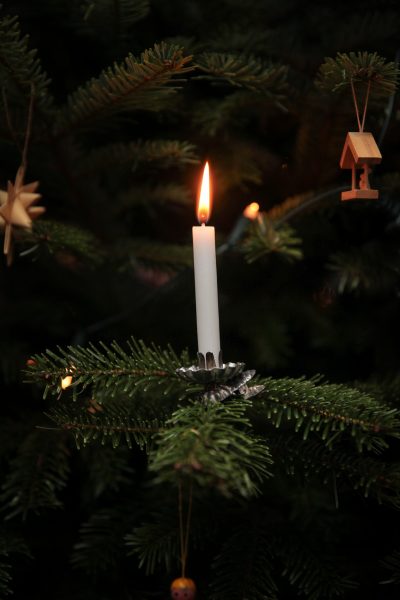 The first reference of a fir tree decorated for Christmas is at Riga in Latvia in 1510. In 1521, the Princess Hélène de Mecklembourg introduced the Christmas tree to Paris after marrying the Duke of Orleans. There also is a printed reference to Christmas trees in Germany, dated 1531. Another famous reference, to 1601, is about a visitor to Strasbourg, Germany (now part of France) who noticed a family decorating a tree with “wafers and golden sugar-twists (barley sugar) and paper flowers of all colours.”

The Christmas tree was introduced to the United States by German settlers and by Hessian mercenaries paid to fight in the Revolutionary War. In 1804, US soldiers stationed at Fort Dearborn (Chicago) hauled trees from surrounding woods to their barracks.

Britain was introduced to the Christmas tree in 1841, when Queen Victoria’s German husband, Prince Albert brought a Christmas tree to Windsor Castle for the Royal family. The custom of the Christmas tree spread quickly to the middle class, to working people, and throughout the colonies (where the Empire’s flag would sometimes top the tree).

Trees were decorated with apples, cakes and candies for many centuries. Martin Luther was the first to use candles on trees in the late 16th Century. In 1842, Charles Minnegrode introduced the custom of decorating trees to the US in Williamsburg, Virginia.

In 1850s, German company Lauscha, based in Thuringia, began to produce shaped glass bead garlands for Christmas trees. They also introduced the Rauschgoldengel, the Tingled-angel’, dressed in pure gilded tin. The glass ornaments reached Britain in the 1870s, and North America around 1880. In 1882, ornaments were complimented by electric Christmas lights. Edward Johnson, a colleague of Thomas Edison, lit a Christmas tree with a string of 80 small electric light bulbs which he had made himself. By 1890, the Christmas light strings were mass-produced. By 1900, stores put up large illuminated trees to lure the customers.

Every year since 1947 the people in Oslo have given a Xmas tree to the city of Westminster (the tree in Trafalgar Square). The gift is an expression of goodwill and gratitude for Britain’s help to Norway in the 1939‐1945 war.

The Night Before Christmas – Poem