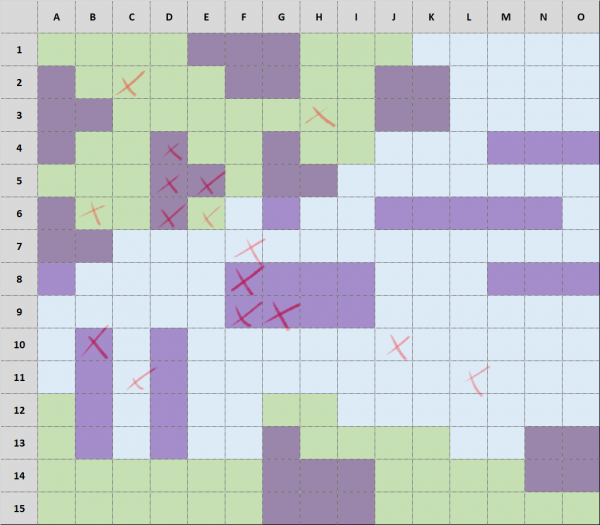 There are a few board game versions of this, but this pen and paper version you can create at home also incorporates land and air units.

Each player draws or prints out the exact same grid size (eg a 15×15 grid with the columns labelled A – O and the rows labelled 1 – 15) and also draw/colour in squares to indicate which are land and which are sea. It should be about 50% land 50% sea, remembering there should be enough sea/land squares to place military units (eg the largest the carrier is 4×2) There are no hard and fast rules as to the size of the map and the number of grid squares, but for convenience and speed probably best not to have more squares in a column or row than letters of the alphabet unless you then want to name the 27th row something like AA, then AB etc. And the larger the grid the longer the game will be.

Players now need to keep each of their sheets hidden and may find it useful to have a second grid to help record their own attacks and possible opponents positions.

Both players have the following units to position on the map, all denoted by filling the relevant number of squares.

Each player secretly from the other marks the locations of their units using the following rules:

Once forces have been positioned, they remain in position for the game.

Players now take turns to fire one shot each by calling out the grid reference they are aiming for. E.g. on the example map calling out “L-11” would be a miss, but if they had called out B-10 this would have hit a cruiser. Their opponent must then inform whether the shot was a hit or miss depending on whether that square is occupied by one of their forces and what they hit. The player firing the shot then marks the square in question on their own map to keep a record of where they have fired a shot and what the result was. Players may also find it useful to keep a record on their own map of where their opponent has fired and what units have been hit/destroyed.

A unit is destroyed once all the squares it occupies has been hit. The player who completely destroys all their opponent’s forces first is the winner.

At any stage of the game, on their turn to play, a player may elect to drop a “blockbuster” into one particular square. Each square touching that square is covered by that one shot thus the “blockbuster” shot covers nine squares. Only one blockbuster shot may be fired by each player in each game.

Another version of salvo is 1 shot for each sea unit that is active. Each time a unit is destroyed that player uses it’s ability to shoot.

Very similar, but there are no land or air units and a plain grid (all sea).

Who wants to be a ‘Bible’ Millionaire